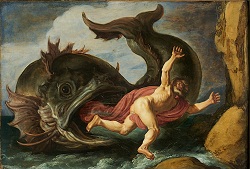 1 But this was greatly displeasing to Jonah, and he became angry.

“I beseech you, LORD,” he prayed, “is not this what I said while I was still in my own country? This is why I fled at first to Tarshish. I knew that you are a gracious and merciful God, slow to anger, rich in clemency, loathe to punish.

And now, LORD, please take my life from me; for it is better for me to die than to live.”

But the LORD asked, “Have you reason to be angry?”

Jonah then left the city for a place to the east of it, where he built himself a hut and waited under it in the shade, to see what would happen to the city.

2 And when the LORD God provided a gourd plant, that grew up over Jonah’s head, giving shade that relieved him of any discomfort, Jonah was very happy over the plant.

But the next morning at dawn God sent a worm which attacked the plant, so that it withered.

And when the sun arose, God sent a burning east wind; and the sun beat upon Jonah’s head till he became faint. Then he asked for death, saying, “I would be better off dead than alive.”

3 Then the LORD said, “You are concerned over the plant which cost you no labor and which you did not raise; it came up in one night and in one night it perished.

And should I not be concerned over Nineveh, the great city, in which there are more than a hundred and twenty thousand persons who cannot distinguish their right hand from their left, not to mention the many cattle?”

1 [1] He became angry: because of his narrowly nationalistic vindictiveness, Jonah did not wish the Lord to forgive the Ninevites.

3 [10-11] Jonah is selfish in bemoaning his personal loss of a shady gourd plant without any concern over the threat of loss of life to the Ninevites through the destruction of their city. If God in his kindness provided the plant for his prophet without the latter’s effort or merit, how much more is he disposed to show love and mercy toward all men, Jew and Gentile, when they repent of their sins and implore his pardon! God’s providence is also shown here to extend even to animals.