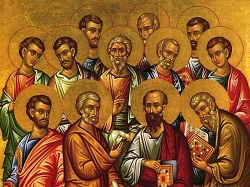 When they took the road through Amphipolis and Apollonia, they reached Thessalonica, where there was a synagogue of the Jews.

Following his usual custom, Paul joined them, and for three sabbaths he entered into discussions with them from the scriptures,

expounding and demonstrating that the Messiah had to suffer and rise from the dead, and that “This is the Messiah, Jesus, whom I proclaim to you.”

Some of them were convinced and joined Paul and Silas; so, too, a great number of Greeks who were worshipers, and not a few of the prominent women.

But the Jews became jealous and recruited some worthless men loitering in the public square, formed a mob, and set the city in turmoil. They marched on the house of Jason, intending to bring them before the people’s assembly.

1 When they could not find them, they dragged Jason and some of the brothers before the city magistrates, shouting, “These people who have been creating a disturbance all over the world have now come here,

and Jason has welcomed them. They all act in opposition to the decrees of Caesar and claim instead that there is another king, Jesus.” 2

They stirred up the crowd and the city magistrates who, upon hearing these charges,

took a surety payment from Jason and the others before releasing them.

The brothers immediately sent Paul and Silas to Beroea during the night. Upon arrival they went to the synagogue of the Jews.

These Jews were more fair-minded than those in Thessalonica, for they received the word with all willingness and examined the scriptures daily to determine whether these things were so.

Many of them became believers, as did not a few of the influential Greek women and men.

But when the Jews of Thessalonica learned that the word of God had now been proclaimed by Paul in Beroea also, they came there too to cause a commotion and stir up the crowds.

So the brothers at once sent Paul on his way to the seacoast, while Silas and Timothy remained behind.

After Paul’s escorts had taken him to Athens, they came away with instructions for Silas and Timothy to join him as soon as possible.

3 While Paul was waiting for them in Athens, he grew exasperated at the sight of the city full of idols.

So he debated in the synagogue with the Jews and with the worshipers, and daily in the public square with whoever happened to be there.

Even some of the Epicurean and Stoic philosophers 4 engaged him in discussion. Some asked, “What is this scavenger trying to say?” Others said, “He sounds like a promoter of foreign deities,” because he was preaching about ‘Jesus’ and ‘Resurrection.’

They took him and led him to the Areopagus 5 and said, “May we learn what this new teaching is that you speak of?

For you bring some strange notions to our ears; we should like to know what these things mean.”

Now all the Athenians as well as the foreigners residing there used their time for nothing else but telling or hearing something new.

Then Paul stood up at the Areopagus and said: 6 “You Athenians, I see that in every respect you are very religious.

For as I walked around looking carefully at your shrines, I even discovered an altar inscribed, ‘To an Unknown God.’ 7 What therefore you unknowingly worship, I proclaim to you.

The God who made the world and all that is in it, the Lord of heaven and earth, does not dwell in sanctuaries made by human hands,

nor is he served by human hands because he needs anything. Rather it is he who gives to everyone life and breath and everything.

He made from one 8 the whole human race to dwell on the entire surface of the earth, and he fixed the ordered seasons and the boundaries of their regions,

so that people might seek God, even perhaps grope for him and find him, though indeed he is not far from any one of us.

For ‘In him we live and move and have our being,’ 9 as even some of your poets have said, ‘For we too are his offspring.’

Since therefore we are the offspring of God, we ought not to think that the divinity is like an image fashioned from gold, silver, or stone by human art and imagination.

God has overlooked the times of ignorance, but now he demands that all people everywhere repent

because he has established a day on which he will ‘judge the world with justice’ through a man he has appointed, and he has provided confirmation for all by raising him from the dead.”

When they heard about resurrection of the dead, some began to scoff, but others said, “We should like to hear you on this some other time.”

And so Paul left them.

But some did join him, and became believers. Among them were Dionysius, a member of the Court of the Areopagus, a woman named Damaris, and others with them.

1 [6-7] The accusations against Paul and his companions echo the charges brought against Jesus in ⇒ Luke 23:2.

2 [7] There is another king, Jesus: a distortion into a political sense of the apostolic proclamation of Jesus and the kingdom of God (see ⇒ Acts 8:12).

3 [16-21] Paul’s presence in Athens sets the stage for the great discourse before a Gentile audience in ⇒ Acts 17:22-31. Although Athens was a politically insignificant city at this period, it still lived on the glories of its past and represented the center of Greek culture. The setting describes the conflict between Christian preaching and Hellenistic philosophy.

4 [18] Epicurean and Stoic philosophers: for the followers of Epicurus (342-271 B.C.), the goal of life was happiness attained through sober reasoning and the searching out of motives for all choice and avoidance. The Stoics were followers of Zeno, a younger contemporary of Alexander the Great. Zeno and his followers believed in a type of pantheism that held that the spark of divinity was present in all reality and that, in order to be free, each person must live “according to nature.” This scavenger: literally, “seed-picker,” as of a bird that picks up grain. The word is later used of scrap collectors and of people who take other people’s ideas and propagate them as if they were their own. Promoter of foreign deities: according to Xenophon, Socrates was accused of promoting new deities. The accusation against Paul echoes the charge against Socrates. “Jesus’ and “Resurrection’: the Athenians are presented as misunderstanding Paul from the outset; they think he is preaching about Jesus and a goddess named Anastasis, i.e., Resurrection.

5 [19] To the Areopagus: the “Areopagus” refers either to the Hill of Ares west of the Acropolis or to the Council of Athens, which at one time met on the hill but which at this time assembled in the Royal Colonnade (Stoa Basileios).

6 [22-31] In Paul’s appearance at the Areopagus he preaches his climactic speech to Gentiles in the cultural center of the ancient world. The speech is more theological than christological. Paul’s discourse appeals to the Greek world’s belief in divinity as responsible for the origin and existence of the universe. It contests the common belief in a multiplicity of gods supposedly exerting their powers through their images. It acknowledges that the attempt to find God is a constant human endeavor. It declares, further, that God is the judge of the human race, that the time of the judgment has been determined, and that it will be executed through a man whom God raised from the dead. The speech reflects sympathy with pagan religiosity, handles the subject of idol worship gently, and appeals for a new examination of divinity, not from the standpoint of creation but from the standpoint of judgment.

7 [23] To an Unknown God’: ancient authors such as Pausanias, Philostratus, and Tertullian speak of Athenian altars with no specific dedication as altars of “unknown gods” or “nameless altars.”

9 [28] ‘In him we live and move and have our being’: some scholars understand this saying to be based on an earlier saying of Epimenides of Knossos (6th century B.C.). ‘For we too are his offspring’: here Paul is quoting Aratus of Soli, a third-century B.C. poet from Cilicia.