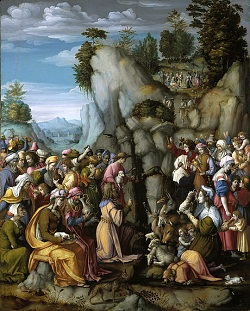 The LORD gave these instructions to Moses on the plains of Moab beside the Jericho stretch of the Jordan:

“Tell the Israelites that out of their hereditary property they shall give the Levites cities for homes, as well as pasture lands around the cities.

The pasture lands of the cities to be assigned the Levites shall extend a thousand cubits from the city walls in each direction.

Thus you shall measure out two thousand cubits outside the city along each side-east, south, west and north-with the city lying in the center. This shall serve them as the pasture lands of their cities.

“Now these are the cities you shall give to the Levites: the six cities of asylum which you must establish as places where a homicide can take refuge, and in addition forty-two other cities –

a total of forty-eight cities with their pasture lands to be assigned the Levites.

1 In assigning the cities from the property of the Israelites, take more from a larger group and fewer from a smaller one, so that each group will cede cities to the Levites in proportion to its own heritage.”

The LORD said to Moses,

“Tell the Israelites: When you go across the Jordan into the land of Canaan,

select for yourselves cities to serve as cities of asylum, where a homicide who has killed someone unintentionally may take refuge.

2 These cities shall serve you as places of asylum from the avenger of blood, so that a homicide shall not be put to death unless he is first tried before the community.

Six cities of asylum shall you assign:

three beyond the Jordan, and three in the land of Canaan.

These six cities of asylum shall serve not only the Israelites but all the resident or transient aliens among them, so that anyone who has killed another unintentionally may take refuge there.

3 “If a man strikes another with an iron instrument and causes his death, he is a murderer and shall be put to death.

If a man strikes another with a death-dealing stone in his hand and causes his death, he is a murderer and shall be put to death.

If a man strikes another with a death-dealing club in his hand and causes his death, he is a murderer and shall be put to death.

The avenger of blood may execute the murderer, putting him to death on sight.

“If a man pushes another out of hatred, or after lying in wait for him throws something at him, and causes his death,

or if he strikes another out of enmity and causes his death, he shall be put to death as a murderer. The avenger of blood may execute the murderer on sight.

“However, if a man pushes another accidentally and not out of enmity, or if without lying in wait for him he throws some object at him,

or without seeing him throws a death-dealing stone which strikes him and causes his death, although he was not his enemy nor seeking to harm him:

then the community, deciding the case between the slayer and the avenger of blood in accordance with these norms,

shall free the homicide from the avenger of blood and shall remand him to the city of asylum where he took refuge; and he shall stay there until the death of the high priest who has been anointed with sacred oil.

If the homicide of his own accord leaves the bounds of the city of asylum where he has taken refuge,

and the avenger of blood finds him beyond these bounds and kills him, the avenger incurs no bloodguilt;

“These shall be norms for you and all your descendants, wherever you live, for rendering judgment.

“Whenever someone kills another, the evidence of witnesses is required for the execution of the murderer. The evidence of a single witness is not sufficient for putting a person to death.

“You shall not accept indemnity in place of the life of a murderer who deserves the death penalty; he must be put to death.

Nor shall you accept indemnity to allow a refugee to leave his city of asylum and again dwell elsewhere in the land before the death of the high priest.

You shall not desecrate the land where you live. Since bloodshed desecrates the land, the land can have no atonement for the blood shed on it except through the blood of him who shed it.

1 [8] This provision was hardly observed in the actual assignment of the levitical cities as narrated in Joshua 21.