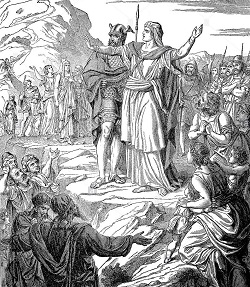 1 At that time there was no king in Israel. Moreover the tribe of Danites were in search of a district to dwell in, for up to that time they had received no heritage among the tribes of Israel.

So the Danites sent from their clan a detail of five valiant men of Zorah and Eshtaol, to reconnoiter the land and scout it. With their instructions to go and scout the land, they traveled as far as the house of Micah in the mountain region of Ephraim, where they passed the night.

2 Near the house of Micah, they recognized the voice of the young Levite and turned in that direction. “Who brought you here and what are you doing here?” they asked him. “What is your interest here?”

“This is how Micah treats me,” he replied to them. “He pays me a salary and I am his priest.”

They said to him, “Consult God, that we may know whether the undertaking we are engaged in will succeed.”

The priest said to them, “Go and prosper: the LORD is favorable to the undertaking you are engaged in.”

So the five men went on and came to Laish. They saw that the people dwelling there lived securely after the manner of the Sidonians, quiet and trusting, with no lack of any natural resources. They were distant from the Sidonians and had no contact with other people.

When the five returned to their kinsmen in Zorah and Eshtaol and were asked for a report,

they replied, “Come, let us attack them, for we have seen the land and it is very good. Are you going to hesitate? Do not be slothful about beginning your expedition to possess the land.

Those against whom you go are a trusting people, and the land is ample. God has indeed given it into your power: a place where no natural resource is lacking.”

So six hundred men of the clan of the Danites, fully armed with weapons of war, set out from where they were in Zorah and Eshtaol,

and camped in Judah, up near Kiriath-jearim; hence to this day the place, which lies west of Kiriath-jearim, is called Mahaneh-dan.

From there they went on to the mountain region of Ephraim and came to the house of Micah.

The five men who had gone to reconnoiter the land of Laish said to their kinsmen, “Do you know that in these houses there are an ephod, household idols, and a carved idol overlaid with silver? Now decide what you must do!”

So turning in that direction, they went to the house of the young Levite at the home of Micah and greeted him.

The six hundred men girt with weapons of war, who were Danites, stood by the entrance of the gate, and the priest stood there also.

Meanwhile the five men who had gone to reconnoiter the land went up and entered the house of Micah.

When they had gone in and taken the ephod, the household idols, and the carved idol overlaid with silver, the priest said to them, “What are you doing?”

They said to him, “Be still: put your hand over your mouth. Come with us and be our father and priest. Is it better for you to be priest for the family of one man or to be priest for a tribe and a clan in Israel?”

The priest, agreeing, took the ephod, household idols, and carved idol and went off in the midst of the band.

As they turned to depart, they placed their little ones, their livestock, and their goods at the head of the column.

The Danites had already gone some distance, when those in the houses near that of Micah took up arms and overtook them.

They called to the Danites, who turned about and said to Micah, “What do you want, that you have taken up arms?”

“You have taken my god, which I made, and have gone off with my priest as well,” he answered. “What is left for me? How, then, can you ask me what I want?”

The Danites said to him, “Let us hear no further sound from you, lest fierce men fall upon you and you and your family lose your lives.”

The Danites then went on their way, and Micah, seeing that they were stronger than he, returned home.

Having taken what Micah had made, and the priest he had had, they attacked Laish, a quiet and trusting people; they put them to the sword and destroyed their city by fire.

No one came to their aid, since the city was far from Sidon and they had no contact with other people. The Danites then rebuilt the city, which was in the valley that belongs to Beth-rehob, and lived there.

They named it Dan after their ancestor Dan, son of Israel. However, the name of the city was formerly Laish.

3 The Danites set up the carved idol for themselves, and Jonathan, son of Gershom, son of Moses, and his descendants were priests for the tribe of the Danites until the time of the captivity of the land.

They maintained the carved idol Micah had made as long as the house of God was in Shiloh.

1 [1] The tribe of Dan had been assigned a territory with definite limits in central Palestine. However they were unable to gain possession of the better portion of their land (⇒ Judges 1:34). So they now seek territory elsewhere in Palestine.

2 [3] Recognized the voice: perhaps they noticed the peculiar pronunciation of his south Hebrew dialect.

3 [30] Until . . . land: about the year 734 B.C., when the Assyrian emperor Tiglath-pileser III subjected northern Palestine.