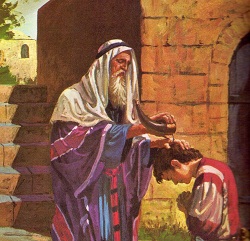 1 During the time young Samuel was minister to the LORD under Eli, a revelation of the LORD was uncommon and vision infrequent.

One day Eli was asleep in his usual place. His eyes had lately grown so weak that he could not see.

The lamp of God was not yet extinguished, and Samuel was sleeping in the temple of the LORD where the ark of God was.

The LORD called to Samuel, who answered, “Here I am.”

Again the LORD called Samuel, who rose and went to Eli. “Here I am,” he said. “You called me.” But he answered, “I did not call you, my son. Go back to sleep.”

At that time Samuel was not familiar with the LORD, because the LORD had not revealed anything to him as yet.

The LORD called Samuel again, for the third time. Getting up and going to Eli, he said, “Here I am. You called me.” Then Eli understood that the LORD was calling the youth.

So he said to Samuel, “Go to sleep, and if you are called, reply, ‘Speak, LORD, for your servant is listening.'” When Samuel went to sleep in his place,

the LORD came and revealed his presence, calling out as before, “Samuel, Samuel!” Samuel answered, “Speak, for your servant is listening.”

The LORD said to Samuel: “I am about to do something in Israel that will cause the ears of everyone who hears it to ring.

On that day I will carry out in full against Eli everything I threatened against his family.

I announce to him that I am condemning his family once and for all, because of this crime: though he knew his sons were blaspheming God, he did not reprove them.

Therefore, I swear to the family of Eli that no sacrifice or offering will ever expiate its crime.”

Samuel then slept until morning, when he got up early and opened the doors of the temple of the LORD. He feared to tell Eli the vision,

2 Then Eli asked, “What did he say to you? Hide nothing from me! May God do thus and so to you if you hide a single thing he told you.”

So Samuel told him everything, and held nothing back. Eli answered, “He is the LORD. He will do what he judges best.”

Samuel grew up, and the LORD was with him, not permitting any word of his to be without effect.

Thus all Israel from Dan to Beer-sheba came to know that Samuel was an accredited prophet of the LORD.

The LORD continued to appear at Shiloh; he manifested himself to Samuel at Shiloh through his word,

2 [17] May God do thus and so to you: the Biblical writers avoid repeating for us the specific terms of a curse as the speaker would have uttered it.