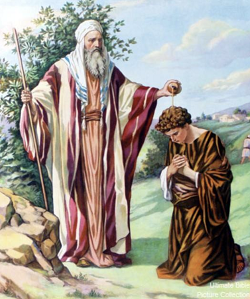 1 David sang the words of this song to the LORD when the LORD had rescued him from the grasp of all his enemies and from the hand of Saul.

This is what he sang: I “O LORD, my rock, my fortress, my deliverer,

2 my God, my rock of refuge! My shield, the horn of my salvation, my stronghold, my refuge, my savior, from violence you keep me safe.

‘Praised be the LORD,’ I exclaim, and I am safe from my enemies.

3 “The breakers of death surged round about me, the floods of perdition overwhelmed me;

The cords of the nether world enmeshed me, the snares of death overtook me.

4 In my distress I called upon the LORD and cried out to my God; From his temple he heard my voice, and my cry reached his ears.

5 “The earth swayed and quaked; the foundations of the heavens trembled and shook when his wrath flared up.

Smoke rose from his nostrils, and a devouring fire from his mouth; he kindled coals into flame.

He inclined the heavens and came down, with dark clouds under his feet.

6 He mounted a cherub and flew, borne on the wings of the wind.

He made darkness the shelter about him, with spattering rain and thickening clouds.

From the brightness of his presence coals were kindled to flame.

“The LORD thundered from heaven; the Most High gave forth his voice.

He sent forth arrows to put them to flight; he flashed lightning and routed them.

Then the wellsprings of the sea appeared, the foundations of the earth were laid bare, At the rebuke of the LORD, at the blast of the wind of his wrath.

“He reached out from on high and grasped me; he drew me out of the deep waters.

He rescued me from my mighty enemy, from my foes, who were too powerful for me.

They attacked me on my day of calamity, but the LORD came to my support.

He set me free in the open, and rescued me, because he loves me.

For I kept the ways of the LORD and was not disloyal to my God.

For his ordinances were all present to me, and his statutes I put not from me;

But I was wholehearted toward him, and I was on my guard against guilt.

Toward the sincere you are sincere; but toward the crooked you are astute.

You save lowly people, though on the lofty your eyes look down.

8 You are my lamp, O LORD! O my God, you brighten the darkness about me.

For with your aid I run against an armed band, and by the help of my God I leap over a wall.

God’s way is unerring; the promise of the LORD is fire-tried; he is a shield to all who take refuge in him.”

“For who is God except the LORD? Who is a rock save our God?

The God who girded me with strength and kept my way unerring;

9 Who made my feet swift as those of hinds and set me on the heights;

Who trained my hands for war till my arms could bend a bow of brass.

“You have given me your saving shield, and your help has made me great.

You made room for my steps; unwavering was my stride.

I pursued my enemies and destroyed them, nor did I turn again till I made an end of them.

I smote them and they did not rise; they fell beneath my feet.

“You girded me with strength for war; you subdued my adversaries beneath me.

My enemies you put to flight before me and those who hated me I destroyed.

They cried for help-but no one saved them; to the LORD – but he answered them not.

I ground them fine as the dust of the earth; like the mud in the streets I trampled them down.

“You rescued me from the strife of my people; you made me head over nations. A people I had not known became my slaves;

as soon as they heard me, they obeyed.

The foreigners fawned and cringed before me; they staggered forth from their fortresses.”

“The LORD live! And blessed be my Rock! Extolled be my God, rock of my salvation.

O God, who granted me vengeance, who made peoples subject to me

and helped me escape from my enemies, Above my adversaries you exalt me and from the violent man you rescue me.

Therefore will I proclaim you, O LORD, among the nations, and I will sing praise to your name,

You who gave great victories to your king and showed kindness to your anointed, to David and his posterity forever.”

2 [3] The horn of my salvation: my strong savior. The horn, the dreadful weapon of an enraged bull, was a symbol of strength; cf ⇒ Luke 1:69.

3 [5-6] These verses are to be understood figuratively.

6 [11] He mounted a cherub: since God makes the winds his messengers, or “angels” (⇒ Psalm 104:4), he is spoken of poetically as riding on the clouds, or on the angelic creatures called “cherubim.” His earthly throne above the ark of the covenant was likewise associated with two winged cherubim; cf ⇒ Exodus 37:7-9. In both senses the Lord is enthroned upon the cherubim; cf ⇒ Psalm 79:2; ⇒ 99:1.