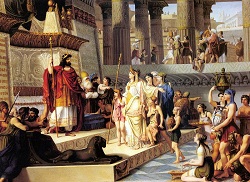 The king then had all the elders of Judah and of Jerusalem summoned together before him.

Standing by the column, the king made a covenant before the LORD that they would follow him and observe his ordinances, statutes and decrees with their whole hearts and souls, thus reviving the terms of the covenant which were written in this book. And all the people stood as participants in the covenant.

Then the king commanded the high priest Hilkiah, his vicar, and the doorkeepers to remove from the temple of the LORD all the objects that had been made for Baal, Asherah, and the whole host of heaven. He had these burned outside Jerusalem on the slopes of the Kidron and their ashes carried to Bethel.

He also put an end to the pseudo-priests whom the kings of Judah had appointed to burn incense on the high places in the cities of Judah and in the vicinity of Jerusalem, as well as those who burned incense to Baal, to the sun, moon, and signs of the Zodiac, and to the whole host of heaven.

From the temple of the LORD he also removed the sacred pole, to the Kidron Valley, outside Jerusalem; there he had it burned and beaten to dust, which was then scattered over the common graveyard.

1 He tore down the apartments of the cult prostitutes which were in the temple of the LORD, and in which the women wove garments for the Asherah.

He brought in all the priests from the cities of Judah, and then defiled, from Geba to Beer-sheba, the high places where they had offered incense. He also tore down the high place of the satyrs, which was at the entrance of the Gate of Joshua, governor of the city, to the left as one enters the city gate.

The priests of the high places could not function at the altar of the LORD in Jerusalem; but they, along with their relatives, ate the unleavened bread.

2 The king also defiled Topheth in the Valley of Ben-hinnom, so that there would no longer be an immolation of sons or daughters by fire in honor of Molech.

3 He did away with the horses which the kings of Judah had dedicated to the sun; these were at the entrance of the temple of the LORD, near the chamber of Nathan-melech the eunuch, which was in the large building. The chariots of the sun he destroyed by fire.

4 The king defiled the high places east of Jerusalem, south of the Mount of Misconduct, which Solomon, king of Israel, had built in honor of Astarte, the Sidonian horror, of Chemosh, the Moabite horror, and of Milcom, the idol of the Ammonites.

He broke to pieces the pillars, cut down the sacred poles, and filled the places where they had been with human bones.

Likewise the altar which was at Bethel, the high place built by Jeroboam, son of Nebat, who caused Israel to sin – this same altar and high place he tore down, breaking up the stones and grinding them to powder, and burning the Asherah.

he asked, “What is that tombstone I see?” The men of the city replied, “It is the grave of the man of God who came from Judah and predicted the very things you have done to the altar of Bethel.”

5 “Let him be,” he said, “let no one move his bones.” So they left his bones undisturbed together with the bones of the prophet who had come from Samaria.

Josiah also removed all the shrines on the high places near the cities of Samaria which the kings of Israel had erected, thereby provoking the LORD; he did the very same to them as he had done in Bethel.

He slaughtered upon the altars all the priests of the high places that were at the shrines, and burned human bones upon them. Then he returned to Jerusalem.

The king issued a command to all the people to observe the Passover of the LORD, their God, as it was prescribed in that book of the covenant.

until the eighteenth year of king Josiah, when this Passover of the LORD was kept in Jerusalem.

6 Further, Josiah did away with the consultation of ghosts and spirits, with the household gods, idols, and all the other horrors to be seen in the land of Judah and in Jerusalem, so that he might carry out the stipulations of the law written in the book that the priest Hilkiah had found in the temple of the LORD.

Before him there had been no king who turned to the LORD as he did, with his whole heart, his whole soul, and his whole strength, in accord with the entire law of Moses; nor could any after him compare with him.

Yet, because of all the provocations that Manasseh had given, the LORD did not desist from his fiercely burning anger against Judah.

The LORD said: “Even Judah will I put out of my sight as I did Israel. I will reject this city, Jerusalem, which I chose, and the temple of which I said, ‘There shall my name be.'”

The rest of the acts of Josiah, with all that he did, are written in the book of the chronicles of the kings of Judah.

In his time Pharaoh Neco, king of Egypt, went up toward the river Euphrates to the king of Assyria. King Josiah set out to confront him, but was slain at Megiddo at the first encounter.

7 His servants brought his body on a chariot from Megiddo to Jerusalem, where they buried him in his own grave. Then the people of the land took Jehoahaz, son of Josiah, anointed him, and proclaimed him king to succeed his father.

Jehoahaz was twenty-three years old when he began to reign, and he reigned three months in Jerusalem. His mother, whose name was Hamutal, daughter of Jeremiah, was from Libnah.

He did evil in the sight of the LORD, just as his forebears had done.

8 Pharaoh Neco took him prisoner at Riblah in the land of Hamath, thus ending his reign in Jerusalem. He imposed a fine upon the land of a hundred talents of silver and a talent of gold.

Pharaoh Neco then appointed Eliakim, son of Josiah, king in place of his father Josiah; he changed his name to Jehoiakim. Jehoahaz he took away with him to Egypt, where he died.

Jehoiakim was twenty-five years old when he began to reign, and he reigned eleven years in Jerusalem. His mother’s name was Zebidah, daughter of Pedaiah, from Rumah.

He did evil in the sight of the LORD, just as his forebears had done.

3 [11] Large building: to the west of the temple area (⇒ 1 Chron 26:18), named in the Hebrew by an Egyptian name for a similar construction.

4 [13] Mount of Misconduct: a paranomasia on “Mount of Olives” (in Hebrew Maschit/mishcheh) as suggested by the Targum. Cf Vulgate, “Mount of Offense.” Horror . . . idol: in all three phrases here the Hebrew uses a pejorative designation meaning “abomination.”

8 [33] A talent of gold: some manuscripts of the Greek and Syriac texts have “ten talents.”