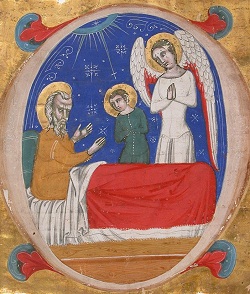 1 This book tells the story of Tobit, son of Tobiel, son of Hananiel, son of Aduel, son of Gabael of the family of Asiel, of the tribe of Naphtali,

who during the reign of Shalmaneser, 2 king of Assyria, was taken captive from Thisbe, which is south of Kedesh Naphtali in upper Galilee, above and to the west of Asser, north of Phogor.

I, Tobit, have walked all the days of my life on the paths of truth and righteousness. I performed many charitable works for my kinsmen and my people who had been deported with me to Nineveh, in Assyria.

When I lived as a young man in my own country, Israel, the entire tribe of my forefather Naphtali had broken away from the house of David and from Jerusalem. This city had been singled out of all Israel’s tribes, so that they all might offer sacrifice in the place where the temple, God’s dwelling, had been built and consecrated for all generations to come.

3 All my kinsmen, like the rest of the tribe of my forefather Naphtali, used to offer sacrifice on all the mountains of Galilee as well as to the young bull which Jeroboam, king of Israel, had made in Dan.

4 I, for my part, would often make the pilgrimage alone to Jerusalem for the festivals, as is prescribed for all Israel by perpetual decree. Bringing with me the first fruits of the field and the firstlings of the flock, together with a tenth of my income and the first shearings of the sheep, I would hasten to Jerusalem

and present them to the priests, Aaron’s sons, at the altar. To the Levites who were doing service in Jeusalem I would give the tithe of grain, wine, olive oil, pomegranates, figs, and other fruits. And except for sabbatical years, I used to give a second tithe in money, which each year I would go and disburse in Jerusalem.

The third tithe I gave to orphans and widows, and to converts who were living with the Israelites. Every third year I would bring them this offering, and we ate it in keeping with the decree of the Mosaic law and the commands of Deborah, the mother of my father Tobiel; for when my father died, he left me an orphan.

When I reached manhood, I married Anna, a woman of our own lineage. By her I had a son whom I named Tobiah.

Now, after I had been deported to Nineveh, all my brothers and relatives ate the food of heathens,

but I refrained from eating that kind of food.

Because of this wholehearted service of God,

the Most High granted me favor and status with Shalmaneser, so that I became purchasing agent for all his needs.

5 Every now and then until his death I would go to Media to buy goods for him. I also deposited several pouches containing a great sum of money with my kinsman Gabael, son of Gabri, who lived at Rages, in Media.

6 But when Shalmaneser died and his son Sennacherib succeeded him as king, the roads to Media became unsafe, so I could no longer go there.

During Shalmaneser’s reign I performed many charitable works for my kinsmen and my people.

7 I would give my bread to the hungry and my clothing to the naked. If I saw one of my people who had died and been thrown outside the walls of Nineveh, I would bury him.

I also buried anyone whom Sennacherib slew when he returned as a fugitive from Judea during the days of judgment decreed against him by the heavenly King because of the blasphemies he had uttered. In his rage he killed many Israelites, but I used to take their bodies by stealth and bury them; so when Sennacherib looked for them, he could not find them.

But a certain citizen of Nineveh informed the king that it was I who buried the dead. When I found out that the king knew all about me and wanted to put me to death, I went into hiding; then in my fear I took to flight.

Afterward, all my property was confiscated; I was left with nothing. All that I had was taken to the king’s palace, except for my wife Anna and my son Tobiah.

8 But less than forty days later the king was assassinated by two of his sons, who then escaped into the mountains of Ararat. His son Esarhaddon, who succeeded him as king, placed Ahiqar, my brother Anael’s son, in charge of all the accounts of his kingdom, so that he took control over the entire administration.

Then Ahiqar interceded on my behalf, and I was able to return to Nineveh. For under Sennacherib, king of Assyria, Ahiqar had been chief cupbearer, keeper of the seal, administrator, and treasurer; and Esarhaddon reappointed him. He was a close relative-in fact, my nephew.

2 [2] Shalmaneser (V) (727-722 B.C.): began the siege of Samaria; the inhabitants of the northern kingdom were taken into captivity by his successor, Sargon II (722-705). Thisbe and Phogor: towns of Galilee that have not been identified; Thisbe in Gilead was perhaps the birthplace of Elijah. Kedesh: cf ⇒ Joshua 20:7. Asser: Hazor (⇒ Joshua 11:1).

3 [5] Jeroboam established sanctuaries in Dan and Bethel so that the people would no longer go to Jerusalem for the festivals. The gold statues of bulls which he placed in the sanctuaries were considered the throne of Yahweh; but the people soon came to worship the images themselves. Jeroboam also encouraged the high places or hilltop shrines (⇒ 1 Kings 12:26-33).

8 [21] Esarhaddon: 681-669 B.C. Ahiqar: a hero of ancient folklore, known for his outstanding wisdom. The Story (or Wisdom) of Ahiqar was very popular in antiquity and is extant in many different forms: Aramaic, Syriac, Armenian, Arabic (Arabian Nights), Greek (Aesop’s Fables), Slavonic, Ethiopic, and Romanian. The sacred author makes Tobit the uncle of the famous Ahiqar in order to enhance Tobit’s own prestige. See note on ⇒ Tobit 14:10.