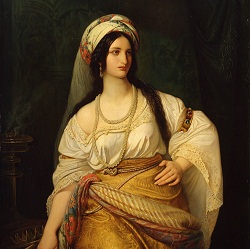 After this, when King Ahasuerus’ wrath had cooled, he thought over what Vashti had done and what had been decreed against her.

Then the king’s personal attendants suggested: “Let beautiful young virgins be sought for the king.

Let the king appoint commissaries in all the provinces of his realm to bring together all beautiful young virgins to the harem in the stronghold of Susa. Under the care of the royal eunuch Hegai, custodian of the women, let cosmetics be given them.

Then the girl who pleases the king shall reign in place of Vashti.” This suggestion pleased the king, and he acted accordingly.

There was in the stronghold of Susa a certain Jew named Mordecai, son of Jair, son of Shimei, son of Kish, a Benjaminite,

who had been exiled from Jerusalem with the captives taken with Jeconiah, king of Judah, whom Nebuchadnezzar, king of Babylon, had deported.

1 He was foster father to Hadassah, that is, Esther, his cousin; for she had lost both father and mother. The girl was beautifully formed and lovely to behold. On the death of her father and mother, Mordecai had taken her as his own daughter.

The girl pleased him and won his favor. So he promptly furnished her with cosmetics and provisions. Then picking out seven maids for her from the royal palace, he transferred both her and her maids to the best place in the harem.

Esther did not reveal her nationality or family, for Mordecai had commanded her not to do so.

Day by day Mordecai would walk about in front of the court of the harem, to learn how Esther was faring and what was to become of her.

Each girl went in turn to visit King Ahasuerus after the twelve months’ preparation decreed for the women. Of this period of beautifying treatment, six months were spent with oil of myrrh, and the other six months with perfumes and cosmetics.

Then, when the girl was to visit the king, she was allowed to take with her from the harem to the royal palace whatever she chose.

She would go in the evening and return in the morning to a second harem under the care of the royal eunuch Shaashgaz, custodian of the concubines. She could not return to the king unless he was pleased with her and had her summoned by name.

As for Esther, daughter of Abihail and adopted daughter of his nephew Mordecai, when her turn came to visit the king, she did not ask for anything but what the royal eunuch Hegai, custodian of the women, suggested. Yet she won the admiration of all who saw her.

Esther was led to King Ahasuerus in his palace in the tenth month, Tebeth, in the seventh year of his reign.

The king loved Esther more than all other women, and of all the virgins she won his favor and benevolence. So he placed the royal diadem on her head and made her queen in place of Vashti.

2 Then the king gave a great feast in honor of Esther to all his officials and ministers, granting a holiday to the provinces and bestowing gifts with royal bounty.

3 [To resume: From the time the virgins had been brought together, and while Mordecai was passing his time at the king’s gate,

Esther had not revealed her family or nationality, because Mordecai had told her not to; and Esther continued to follow Mordecai’s instructions, just as she had when she was being brought up by him.

4 And during the time that Mordecai spent at the king’s gate, Bagathan and Thares, two of the royal eunuchs who guarded the entrance, had plotted in anger to lay hands on King Ahasuerus.

When the plot became known to Mordecai, he told Queen Esther, who in turn informed the king for Mordecai.

5 The matter was investigated and verified, and both of them were hanged on a gibbet. This was written in the annals for the king’s use.]

1 [7] Hadassah (the feminine form of hadas, myrtle), was the name by which this woman would be known among her Jewish compatriots. Esther is a variant of the name of the Babylonian goddess lshtar.

4 [21] Mordecai . . . at the king’s gate: to exercise watchful care for Esther. Some understand this to mean that Mordecai was stationed at the gate to render royal service; cf ⇒ Esther A:2.

5 [23] Hanged on a gibbet: impaled, perhaps, after the Babylonian manner.

Or enter a custom amount