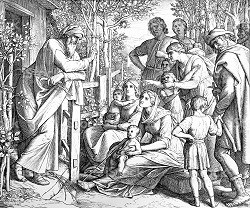 1 2 Now will I praise those godly men, our ancestors, each in his own time:

The abounding glory of the Most High’s portion, his own part, since the days of old. Subduers of the land in kingly fashion, men of renown for their might,

Or counselors in their prudence, or seers of all things in prophecy;

Resolute princes of the folk, and governors with their staves; Authors skilled in composition, and forgers of epigrams with their spikes;

Composers of melodious psalms, or discoursers on lyric themes;

Stalwart men, solidly established and at peace in their own estates –

All these were glorious in their time, each illustrious in his day.

Some of them have left behind a name and men recount their praiseworthy deeds;

But of others there is no memory, for when they ceased, they ceased. And they are as though they had not lived, they and their children after them.

Yet these also were godly men whose virtues have not been forgotten;

Their wealth remains in their families, their heritage with their descendants;

Through God’s covenant with them their family endures, their posterity, for their sake.

And for all time their progeny will endure, their glory will never be blotted out;

Their bodies are peacefully laid away, but their name lives on and on.

At gatherings their wisdom is retold, and the assembly proclaims their praise.

3 [ENOCH walked with the LORD and was taken up, that succeeding generations might learn by his example.]

NOAH, found just and perfect, renewed the race in the time of devastation. Because of his worth there were survivors, and with a sign to him the deluge ended;

A lasting agreement was made with him, that never should all flesh be destroyed.

ABRAHAM, father of many peoples, kept his glory without stain:

4 He observed the precepts of the Most High, and entered into an agreement with him; In his own flesh he incised the ordinance, and when tested he was found loyal.

5 For this reason, God promised him with an oath that in his descendants the nations would be blessed, That he would make him numerous as the grains of dust, and exalt his posterity like the stars; That he would give them an inheritance from sea to sea, and from the River to the ends of the earth.

And for ISAAC he renewed the same promise because of Abraham, his father. The covenant with all his forebears was confirmed, and the blessing rested upon the head of JACOB.

God acknowledged him as the first-born, and gave him his inheritance. He fixed the boundaries for his tribes, and their division into twelve.

1 [⇒ 44:1-⇒ 50:24] As in the previous section God’s wisdom shone forth in the works of nature, so in these chapters it is also revealed through the history of God’s people as seen in the lives of their patriarchs, prophets, priests and rulers. The example of these great men, whose virtues are here recalled, constitutes a high point of the author’s teaching and illustrates his belief in the canonical Scriptures.

2 [1-15] The reader is here introduced to those men of Israel, later mentioned by name, who through various achievements and beneficial social activities have acquired great renown (⇒ Sirach 44:1-8, ⇒ 14-15); and also to those who, though forgotten, endure through the fruit of their virtues and through their families because of God’s covenant with them (⇒ Sirach 44:9-13).

3 [16] Enoch: because of his friendship with God and also by reason of his unusual disappearance from the earth, this prophet’s renown was great among the chosen people, particularly in the two centuries just before the coming of Christ; cf ⇒ Genesis 5:21-24; ⇒ Hebrews 11:5. The present verse is an expansion of the original text; cf ⇒ Sirach 49:14.