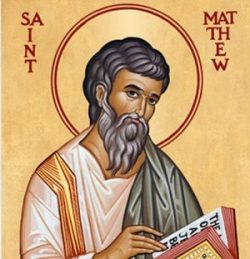 1 Then Jesus was led by the Spirit into the desert to be tempted by the devil.

He fasted for forty days and forty nights, 2 and afterwards he was hungry.

The tempter approached and said to him, “If you are the Son of God, command that these stones become loaves of bread.”

3 He said in reply, “It is written: ‘One does not live by bread alone, but by every word that comes forth from the mouth of God.'”

4 Then the devil took him to the holy city, and made him stand on the parapet of the temple,

and said to him, “If you are the Son of God, throw yourself down. For it is written: ‘He will command his angels concerning you and ‘with their hands they will support you, lest you dash your foot against a stone.'”

Jesus answered him, “Again it is written, ‘You shall not put the Lord, your God, to the test.'”

Then the devil took him up to a very high mountain, and showed him all the kingdoms of the world in their magnificence,

and he said to him, “All these I shall give to you, if you will prostrate yourself and worship me.” 5

At this, Jesus said to him, “Get away, Satan! It is written: ‘The Lord, your God, shall you worship and him alone shall you serve.'”

Then the devil left him and, behold, angels came and ministered to him.

6 When he heard that John had been arrested, he withdrew to Galilee.

He left Nazareth and went to live in Capernaum by the sea, in the region of Zebulun and Naphtali,

that what had been said through Isaiah the prophet might be fulfilled:

“Land of Zebulun and land of Naphtali, the way to the sea, beyond the Jordan, Galilee of the Gentiles,

the people who sit in darkness have seen a great light, on those dwelling in a land overshadowed by death light has arisen.”

7 From that time on, Jesus began to preach and say, “Repent, for the kingdom of heaven is at hand.”

8 As he was walking by the Sea of Galilee, he saw two brothers, Simon who is called Peter, and his brother Andrew, casting a net into the sea; they were fishermen.

He said to them, “Come after me, and I will make you fishers of men.”

9 At once they left their nets and followed him.

He walked along from there and saw two other brothers, James, the son of Zebedee, and his brother John. They were in a boat, with their father Zebedee, mending their nets. He called them,

and immediately they left their boat and their father and followed him.

10 He went around all of Galilee, teaching in their synagogues, 11 proclaiming the gospel of the kingdom, and curing every disease and illness among the people.

12 His fame spread to all of Syria, and they brought to him all who were sick with various diseases and racked with pain, those who were possessed, lunatics, and paralytics, and he cured them.

And great crowds from Galilee, the Decapolis, 13 Jerusalem, and Judea, and from beyond the Jordan followed him.

1 [1-11] Jesus, proclaimed Son of God at his baptism, is subjected to a triple temptation. Obedience to the Father is a characteristic of true sonship, and Jesus is tempted by the devil to rebel against God, overtly in the third case, more subtly in the first two. Each refusal of Jesus is expressed in language taken from the Book of Deuteronomy (⇒ Deut 8:3; ⇒ 6:13, ⇒ 16). The testings of Jesus resemble those of Israel during the wandering in the desert and later in Canaan, and the victory of Jesus, the true Israel and the true Son, contrasts with the failure of the ancient and disobedient “son,” the old Israel. In the temptation account Matthew is almost identical with Luke; both seem to have drawn upon the same source.

2 [2] Forty days and forty nights: the same time as that during which Moses remained on Sinai (⇒ Exodus 24:18). The time reference, however, seems primarily intended to recall the forty years during which Israel was tempted in the desert (⇒ Deut 8:2).

3 [4] Cf ⇒ Deut 8:3. Jesus refuses to use his power for his own benefit and accepts whatever God wills.

5 [9] The worship of Satan to which Jesus is tempted is probably intended to recall Israel’s worship of false gods. His refusal is expressed in the words of ⇒ Deut 6:13.

6 [12-17] Isaiah’s prophecy of the light rising upon Zebulun and Naphtali (Isaiah 8:22-⇒ 9:1) is fulfilled in Jesus’ residence at Capernaum. The territory of these two tribes was the first to be devastated (733-32 B.C.) at the time of the Assyrian invasion. In order to accommodate Jesus’ move to Capernaum to the prophecy, Matthew speaks of that town as being “in the region of Zebulun and Naphtali” (⇒ Matthew 4:13), whereas it was only in the territory of the latter, and he understands the sea of the prophecy, the Mediterranean, as the sea of Galilee.

7 [17] At the beginning of his preaching Jesus takes up the words of John the Baptist (⇒ Matthew 3:2) although with a different meaning; in his ministry the kingdom of heaven has already begun to be present (⇒ Matthew 12:28).

8 [18-22] The call of the first disciples promises them a share in Jesus’ work and entails abandonment of family and former way of life. Three of the four, Simon, James, and John, are distinguished among the disciples by a closer relation with Jesus (⇒ Matthew 17:1; ⇒ 26:37).

10 [23-25] This summary of Jesus’ ministry concludes the narrative part of the first book of Matthew’s gospel (Matthew 3-4). The activities of his ministry are teaching, proclaiming the gospel, and healing; cf ⇒ Matthew 9:35.

12 [24] Syria: the Roman province to which Palestine belonged.

13 [25] The Decapolis: a federation of Greek cities in Palestine, originally ten in number, all but one east of the Jordan.