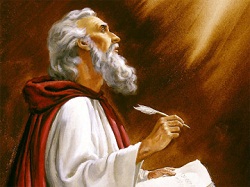 1 Do not rebuke an older man, but appeal to him as a father. Treat younger men as brothers,

older women as mothers, and younger women as sisters with complete purity.

Honor widows who are truly widows.

But if a widow has children or grandchildren, let these first learn to perform their religious duty to their own family and to make recompense to their parents, for this is pleasing to God.

The real widow, who is all alone, has set her hope on God and continues in supplications and prayers night and day.

But the one who is self-indulgent is dead while she lives.

Command this, so that they may be irreproachable.

And whoever does not provide for relatives and especially family members has denied the faith and is worse than an unbeliever.

Let a widow be enrolled if she is not less than sixty years old, married only once,

with a reputation for good works, namely, that she has raised children, practiced hospitality, washed the feet of the holy ones, helped those in distress, involved herself in every good work.

But exclude younger widows, for when their sensuality estranges them from Christ, they want to marry

and will incur condemnation for breaking their first pledge.

And furthermore, they learn to be idlers, going about from house to house, and not only idlers but gossips and busybodies as well, talking about things that ought not to be mentioned.

So I would like younger widows to marry, have children, and manage a home, so as to give the adversary no pretext for maligning us.

For some have already turned away to follow Satan.

If any woman believer 2 has widowed relatives, she must assist them; the church is not to be burdened, so that it will be able to help those who are truly widows.

3 Presbyters who preside well deserve double honor, especially those who toil in preaching and teaching.

For the scripture says, “You shall not muzzle an ox when it is threshing,” and, “A worker deserves his pay.”

Do not accept an accusation against a presbyter unless it is supported by two or three witnesses.

Reprimand publicly those who do sin, so that the rest also will be afraid.

I charge you before God and Christ Jesus and the elect angels to keep these rules without prejudice, doing nothing out of favoritism.

Do not lay hands too readily on anyone, and do not share in another’s sins. Keep yourself pure.

Stop drinking only water, but have a little wine for the sake of your stomach and your frequent illnesses.

Some people’s sins are public, preceding them to judgment; but other people are followed by their sins.

Similarly, good works are also public; and even those that are not cannot remain hidden.

1 [1-16] After a few words of general advice based on common sense (⇒ 1 Tim 5:1-2), the letter takes up, in its several aspects, the subject of widows. The first responsibility for their care belongs to the family circle, not to the Christian community as such (⇒ 1 Tim 5:3-4, ⇒ 16). The widow left without the aid of relatives may benefit the community by her prayer, and the community should consider her material sustenance its responsibility (⇒ 1 Tim 5:5-8). Widows who wish to work directly for the Christian community should not be accepted unless they are well beyond the probability of marriage, i.e., sixty years of age, married only once, and with a reputation for good works (⇒ 1 Tim 5:9-10). Younger widows are apt to be troublesome and should be encouraged to remarry (⇒ 1 Tim 5:11-15).

2 [16] Woman believer: some early Latin manuscripts and Fathers have a masculine here, while most later manuscripts and patristic quotations conflate the two readings, perhaps to avoid unfair restriction to women.

3 [17-25] The function of presbyters is not exactly the same as that of the episkopos, “bishop” (⇒ 1 Tim 3:1); in fact, the relation of the two at the time of this letter is obscure (but cf the note on ⇒ Titus 1:5-9). The Pastorals seem to reflect a transitional stage that developed in many regions of the church into the monarchical episcopate of the second and third centuries. The presbyters possess the responsibility of preaching and teaching, for which functions they are supported by the community (⇒ 1 Tim 5:17-18). The realization that their position subjects them to adverse criticism is implied in the direction to Timothy (⇒ 1 Tim 5:19-20) to make sure of the truth of any accusation against them before public reproof is given. He must be as objective as possible in weighing charges against presbyters (⇒ 1 Tim 5:21), learning from his experience to take care in selecting them (⇒ 1 Tim 5:22). Some scholars take ⇒ 1 Tim 5:22 as a reference not to ordination of presbyters but to reconciliation of public sinners. The letter now sounds an informal note of personal concern in its advice to Timothy not to be so ascetic that he even avoids wine (⇒ 1 Tim 5:23). Judgment concerning the fitness of candidates to serve as presbyters is easy with persons of open conduct, more difficult and prolonged with those of greater reserve (⇒ 1 Tim 5:24-25).