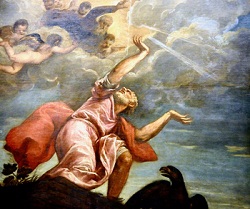 1 I heard a loud voice speaking from the temple to the seven angels, “Go and pour out the seven bowls of God’s fury upon the earth.”

The first angel went and poured out his bowl on the earth. Festering and ugly sores broke out on those who had the mark of the beast or worshiped its image. 2

3 The second angel poured out his bowl on the sea. The sea turned to blood like that from a corpse; every creature living in the sea died.

The third angel poured out his bowl on the rivers and springs of water. These also turned to blood.

Then I heard the angel in charge of the waters say: “You are just, O Holy One, who are and who were, in passing this sentence.

For they have shed the blood of the holy ones and the prophets, and you (have) given them blood to drink; it is what they deserve.”

Then I heard the altar cry out, “Yes, Lord God almighty, your judgments are true and just.”

The fourth angel poured out his bowl on the sun. It was given the power to burn people with fire.

People were burned by the scorching heat and blasphemed the name of God who had power over these plagues, but they did not repent or give him glory.

The fifth angel poured out his bowl on the throne of the beast. 4 Its kingdom was plunged into darkness, and people bit their tongues in pain

and blasphemed the God of heaven because of their pains and sores. But they did not repent of their works.

The sixth angel emptied his bowl on the great river Euphrates. Its water was dried up to prepare the way for the kings of the East. 5

These were demonic spirits who performed signs. They went out to the kings of the whole world to assemble them for the battle on the great day of God the almighty.

(“Behold, I am coming like a thief.” 7 Blessed is the one who watches and keeps his clothes ready, so that he may not go naked and people see him exposed.)

They then assembled the kings in the place that is named Armageddon 8 in Hebrew.

The seventh angel poured out his bowl into the air. A loud voice came out of the temple from the throne, saying, “It is done.”

Then there were lightning flashes, rumblings, and peals of thunder, and a great earthquake. It was such a violent earthquake that there has never been one like it since the human race began on earth.

The great city 9 was split into three parts, and the gentile cities fell. But God remembered great Babylon, giving it the cup filled with the wine of his fury and wrath.

10 Every island fled, and mountains disappeared.

Large hailstones like huge weights came down from the sky on people, and they blasphemed God for the plague of hail because this plague was so severe.