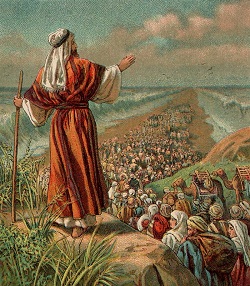 1 These are the names of the sons of Israel who, accompanied by their households, migrated with Jacob into Egypt:

Dan and Naphtali; Gad and Asher.

3 The total number of the direct descendants of Jacob was seventy. Joseph was already in Egypt.

Now Joseph and all his brothers and that whole generation died.

But the Israelites were fruitful and prolific. They became so numerous and strong that the land was filled with them.

Then a new king, who knew nothing of Joseph 4 , came to power in Egypt.

He said to his subjects, “Look how numerous and powerful the Israelite people are growing, more so than we ourselves!

Come, let us deal shrewdly with them to stop their increase; otherwise, in time of war they too may join our enemies to fight against us, and so leave our country.”

5 Accordingly, taskmasters were set over the Israelites to oppress them with forced labor. Thus they had to build for Pharaoh the supply cities of Pithom and Raamses.

and reduced them to cruel slavery,

6 making life bitter for them with hard work in mortar and brick and all kinds of field work – the whole cruel fate of slaves.

The king of Egypt told the Hebrew midwives, one of whom was called Shiphrah and the other Puah,

7 When you act as midwives for the Hebrew women and see them giving birth, if it is a boy, kill him; but if it is a girl, she may live.”

The midwives, however, feared God; they did not do as the king of Egypt had ordered them, but let the boys live.

So the king summoned the midwives and asked them, “Why have you acted thus, allowing the boys to live?”

The midwives answered Pharaoh, “The Hebrew women are not like the Egyptian women. They are robust and give birth before the midwife arrives.”

Therefore God dealt well with the midwives. The people, too, increased and grew strong.

And because the midwives feared God, he built up families for them.

8 Pharaoh then commanded all his subjects, “Throw into the river every boy that is born to the Hebrews, but you may let all the girls live.”

1 [1] Sons of Israel: here literally the first-generation sons of Jacob. Cf ⇒ Genesis 1:5. However, beginning with ⇒ Exodus 1:7 the same Hebrew phrase refers to the more remote descendants of Jacob; hence, from here on, it is ordinarily rendered “the Israelites.” Households: the family in its fullest sense, including wives, children and servants.

4 [8] Who knew nothing of Joseph: this king ignored the services that Joseph had rendered to Egypt.

5 [11] Pharaoh: not a personal name, but a title common to all the kings of Egypt.

7 [16] And see them giving birth: the Hebrew text is uncertain.