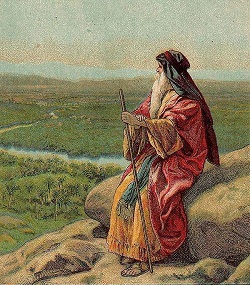 “Then we turned and proceeded toward Bashan. But Og, king of Bashan, advanced against us with all his people to give battle at Edrei.

The LORD, however, said to me, ‘Do not be afraid of him, for I have delivered him into your hand with all his people and his land. Do to him as you did to Sihon, king of the Amorites, who lived in Heshbon.’

And thus the LORD, our God, delivered into our hands Og, king of Bashan, with all his people. We defeated him so completely that we left him no survivor.

At that time we captured all his cities, none of them eluding our grasp, the whole region of Argob, the kingdom of Og in Bashan: sixty cities in all,

to say nothing of the great number of unwalled towns. All the cities were fortified with high walls and gates and bars.

As we had done to Sihon, king of Heshbon, so also here we doomed all the cities, with their men, women and children;

but all the livestock and the loot of each city we took as booty for ourselves.

(which is called Sirion by the Sidonians and Senir by the Amorites),

1 (Og, king of Bashan, was the last remaining survivor of the Rephaim. He had a bed of iron, nine regular cubits long and four wide, which is still preserved in Rabbah of the Ammonites.)

“When we occupied the land at that time, I gave Reuben and Gad the territory from Aroer, on the edge of the Wadi Arnon, halfway up into the highlands of Gilead, with the cities therein.

The rest of Gilead and all of Bashan, the kingdom of Og, the whole Argob region, I gave to the half-tribe of Manasseh. (All this region of Bashan was once called a land of the Rephaim.

Jair, a Manassehite clan, took all the region of Argob as far as the border of the Geshurites and Maacathites, and called it after his own name Bashan Havvoth-jair, the name it bears today.)

To Machir I gave Gilead,

and to Reuben and Gad the territory from Gilead to the Wadi Arnon – including the wadi bed and its banks – and to the Wadi Jabbok, which is the border of the Ammonites,

as well as the Arabah with the Jordan and its eastern banks from Chinnereth to the Salt Sea of the Arabah, under the slopes of Pisgah.

2 “At that time I charged them as follows ‘The LORD, your God, has given you this land as your own. But all you troops equipped for battle must cross over in the vanguard of your brother Israelites.

Only your wives and children, as well as your livestock, of which I know you have a large number, shall remain behind in the towns I have given you,

until the LORD has settled your kinsmen as well, and they too possess the land which the LORD, your God, will give them on the other side of the Jordan. Then you may all return to the possessions I have given you.’

“It was then that I instructed Joshua, ‘Your eyes have seen all that the LORD, your God, has done to both these kings; so, too, will the LORD do to all the kingdoms which you will encounter over there.

Fear them not, for the LORD, your God, will fight for you.’

“And it was then that I besought the LORD,

‘O Lord GOD, you have begun to show to your servant your greatness and might. For what god in heaven or on earth can perform deeds as mighty as yours?

Ah, let me cross over and see this good land beyond the Jordan, this fine hill country, and the Lebanon!’

But the LORD was angry with me on your account and would not hear me. ‘Enough!’ the LORD said to me. ‘Speak to me no more of this.

Commission Joshua, and encourage and strengthen him, for he shall cross at the head of this people and shall put them in possession of the land you are to see.’

This was while we were in the ravine opposite Beth-peor.

2 [18] I charged them the words which follow were spoken to the men of Reuben and Gad (cf Numbers 32).