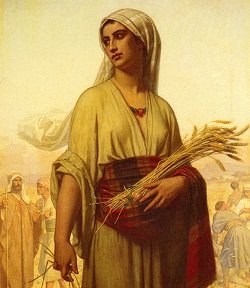 Naomi had a prominent kinsman named Boaz, of the clan of her husband Elimelech.

1 Ruth the Moabite said to Naomi, “Let me go and glean ears of grain in the field of anyone who will allow me that favor.” Naomi said to her, “Go, my daughter,”

and she went. The field she entered to glean after the harvesters happened to be the section belonging to Boaz of the clan of Elimelech.

2 Boaz himself came from Bethlehem and said to the harvesters, “The LORD be with you!” and they replied, “The LORD bless you!”

Boaz asked the overseer of his harvesters, “Whose girl is this?”

The overseer of the harvesters answered, “She is the Moabite girl who returned from the plateau of Moab with Naomi.

She asked leave to gather the gleanings into sheaves after the harvesters; and ever since she came this morning she has remained here until now, with scarcely a moment’s rest.”

Boaz said to Ruth, “Listen, my daughter! Do not go to glean in anyone else’s field; you are not to leave here. Stay here with my women servants.

Watch to see which field is to be harvested, and follow them; I have commanded the young men to do you no harm. When you are thirsty, you may go and drink from the vessels the young men have filled.”

Casting herself prostrate upon the ground, she said to him, “Why should I, a foreigner, be favored with your notice?”

Boaz answered her: “I have had a complete account of what you have done for your mother-in-law after your husband’s death; you have left your father and your mother and the land of your birth, and have come to a people whom you did not know previously.

May the LORD reward what you have done! May you receive a full reward from the LORD, the God of Israel, under whose wings you have come for refuge.”

She said, “May I prove worthy of your kindness, my lord: you have comforted me, your servant, with your consoling words; would indeed that I were a servant of yours!”

At mealtime Boaz said to her, “Come here and have some food; dip your bread in the sauce.” Then as she sat near the reapers, he handed her some roasted grain and she ate her fill and had some left over.

She rose to glean, and Boaz instructed his servants to let her glean among the sheaves themselves without scolding her,

and even to let drop some handfuls and leave them for her to glean without being rebuked.

She gleaned in the field until evening, and when she beat out what she had gleaned it came to about an ephah of barley,

which she took into the city and showed to her mother-in-law. Next she brought out and gave her what she had left over from lunch.

3 “May he be blessed by the LORD, who is ever merciful to the living and to the dead,” Naomi exclaimed to her daughter-in-law; and she continued, “He is a relative of ours, one of our next of kin.”

“He even told me,” added Ruth the Moabite, “that I should stay with his servants until they complete his entire harvest.”

“You would do well, my dear,” Naomi rejoined, “to go out with his servants; for in someone else’s field you might be insulted.”

So she stayed gleaning with the servants of Boaz until the end of the barley and wheat harvests.

2 [4] The LORD be with you: courtesy and religious feeling characterize the salutations of the Hebrews. This greeting is used in the Christian liturgy.

3 [20] One of our next of kin: literally “our redeemer,” a near relative of the same clan who had the right and duty to restore the land which an impoverished kinsman had alienated (⇒ Lev 25:25-28), and to marry the widow of a relative who had died without male offspring so as to raise up posterity to his name (⇒ Deut 25:5-10).