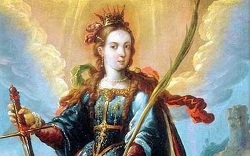 It was the twelfth year of the reign of Nebuchadnezzar, king of the Assyriansin the great city of Nineveh. At that time Arphaxad ruled over the Medes in Ecbatana.

Around this city he built a wall of blocks of stone, each three cubits inheight and six in length. He made the wall seventy cubits high and fifty thick.

At the gates he raised towers of a hundred cubits, with a thickness of sixty cubits at the base.

The gateway he built to a height of seventy cubits, with an opening forty cubits wide for the passage of his chariot forces and the marshaling of his infantry.

Then King Nebuchadnezzar waged war against King Arphaxad in the vast plain, in the district of Ragae.

1 To him there rallied all the inhabitants of the mountain region, all who dwelt along the Euphrates, the Tigris, and the Hydaspes, and King Arioch of the Elamites, in the plain. Thus many nations came together to resist the people of Cheleoud.

to the peoples of Carmel, Gilead, Upper Galilee, and the vast plain of Esdraelon,

to all those in Samaria and its cities, and west of the Jordan as far as Jerusalem, Bethany, Chelous, Kadesh, and the River of Egypt; to Tahpanhes, Raamses, all the land of Goshen,

Tanis, Memphis and beyond, and to all the inhabitants of Egypt as far as the borders of Ethiopia.

But the inhabitants of all that land disregarded the summons of Nebuchadnezzar, king of the Assyrians, and would not go with him to the war. They were not afraid of him but regarded him as a lone individual opposed to them, and turned away his envoys empty-handed, in disgrace.

2 Then Nebuchadnezzar fell into a violent rage against all that land, and swore by his throne and his kingdom that he would avenge himself on all the territories of Cilicia and Damascus and Syria, and also destroy with his sword all the inhabitants of Moab, Ammon, the whole of Judea, and those living anywhere in Egypt as far as the borders of the two seas.

In the seventeenth year he proceeded with his army against King Arphaxad, and was victorious in his campaign. He routed the whole force of Arphaxad, his entire cavalry and all his chariots,

and took possession of his cities. He pressed on to Ecbatana and took its towers, sacked its marketplaces, and turned its glory into shame.

Arphaxad himself he overtook in the mountains of Ragae, ran him through with spears, and utterly destroyed him.

Then he returned home with all his numerous, motley horde of warriors; and there he and his army relaxed and feasted for a hundred and twenty days.

1 [6] Cheleoud: probably the Chaldeans are meant.

2 [12] The two seas: the ancient rulers in Mesopotamia often designated the limits of their realm as extending from the Upper Sea (the Mediterranean) to the Lower Sea (the Persian Gulf).