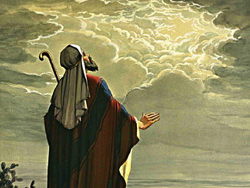 1 Thus says the LORD to his anointed, Cyrus, whose right hand I grasp, Subduing nations before him, and making kings run in his service, Opening doors before him and leaving the gates unbarred:

2 I will go before you and level the mountains; Bronze doors I will shatter, and iron bars I will snap.

I will give you treasures out of the darkness, and riches that have been hidden away, That you may know that I am the LORD, the God of Israel, who calls you by your name.

For the sake of Jacob, my servant, of Israel my chosen one, I have called you by your name, giving you a title, though you knew me not.

I am the LORD and there is no other, there is no God besides me. It is I who arm you, though you know me not,

3 so that toward the rising and the setting of the sun men may know that there is none besides me. I am the LORD, there is no other;

4 I form the light, and create the darkness, I make well-being and create woe; I, the LORD, do all these things.

5 Let justice descend, O heavens, like dew from above, like gentle rain let the skies drop it down. Let the earth open and salvation bud forth; let justice also spring up! I, the LORD, have created this.

6 Woe to him who contends with his Maker; a potsherd among potsherds of the earth! Dare the clay say to its modeler, “What are you doing?” or, “What you are making has no hands”?

Thus says the LORD, the Holy One of Israel, his maker: You question me about my children, or prescribe the work of my hands for me!

It was I who made the earth and created mankind upon it; It was my hands that stretched out the heavens; I gave the order to all their host.

7 It was I who stirred up one for the triumph of justice; all his ways I make level. He shall rebuild my city and let my exiles go free Without price or ransom, says the LORD of hosts.

8 Thus says the LORD: The earnings of Egypt, the gain of Ethiopia, and the Sabeans, tall of stature, Shall come over to you and belong to you; they shall follow you, coming in chains. Before you they shall fall prostrate, saying in prayer: “With you only is God, and nowhere else; the gods are nought.

9 Truly with you God is hidden, the God of Israel, the savior!

Israel, you are saved by the LORD, saved forever! You shall never be put to shame or disgrace in future ages.”

10 For thus says the LORD, The creator of the heavens, who is God, The designer and maker of the earth who established it, Not creating it to be a waste, but designing it to be lived in: I am the LORD, and there is no other.

I have not spoken from hiding nor from some dark place of the earth, And I have not said to the descendants of Jacob, “Look for me in an empty waste.” I, the LORD, promise justice, I foretell what is right.

11 Come and assemble, gather together, you fugitives from among the gentiles! They are without knowledge who bear wooden idols and pray to gods that cannot save.

Come here and declare in counsel together: Who announced this from the beginning and foretold it from of old? Was it not I, the LORD, besides whom there is no other God? There is no just and saving God but me.

Turn to me and be safe, all you ends of the earth, for I am God; there is no other!

By myself I swear, uttering my just decree and my unalterable word: To me every knee shall bend; by me every tongue shall swear,

Saying, “Only in the LORD are just deeds and power. Before him in shame shall come all who vent their anger against him.

In the LORD shall be the vindication and the glory of all the descendants of Israel.”

1 [1] Anointed: in Hebrew, meshiah, from which the word “Messiah” is derived; from its Greek translation Christos, we have the name “Christ.” Applied to kings, “anointed” originally referred only to those of Israel, but it is here given to Cyrus because he is the agent of the Lord.

4 [7] Create woe: God permits evil for the sake of a greater good.

5 [8] The Vulgate rendering gives a more precise messianic sense to this verse, using “just one” and “savior” in place of justice and salvation. The Advent liturgy uses the Vulgate form, Rorate coeli desuper . . ., to express the world’s longing for the coming of Christ.

6 [9] No one may challenge God’s freedom of action, exemplified here by the selection of Cyrus as his anointed.

7 [13] One: Cyrus, called by God for the deliverance and restoration of Israel.

9 [15] God is hidden: he dwells invisibly in the holy of holies.

10 [18] Waste: an allusion to the beginning of creation, when the earth was waste and void (⇒ Genesis 1:2), the same Hebrew word, tohu, being used in both passages. The further reference here is to Palestine, which God wishes again to be inhabited by the returning exiles.