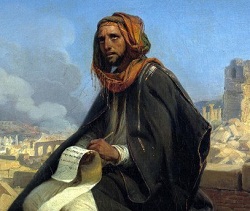 1 This word came to Jeremiah from the LORD, after Nebuzaradan, captain of the bodyguard, had released him in Ramah, where he had found him a prisoner in chains, among the captives of Jerusalem and Judah who were being exiled to Babylon.

When the captain of the bodyguard took charge of Jeremiah, he said to him, “The LORD, your God, foretold the ruin of this place.

Now he has brought about in deed what he threatened; because you sinned against the LORD and did not obey his voice, this fate has befallen you.

And now, I am freeing you today from the fetters that bind your hands; if it seems good to you to come with me to Babylon, you may come: I will look after you well. But if it does not please you to come to Babylon, you need not come. See, the whole land is before you; go wherever you think good and proper”;

and then, before he left – “or go to Gedaliah, son of Ahikam, son of Shaphan, whom the king of Babylon has appointed ruler over the cities of Judah; stay with him among the people, or go wherever you please.” The captain of the bodyguard gave him food and gifts and let him go.

2 Jeremiah went to Gedaliah, son of Ahikam, in Mizpah, and stayed with him among the people left in the land.

When the army leaders who were still in the field with all their men heard that the king of Babylon had given Gedaliah, son of Ahikam, charge of the land, of men, women, and children, and of those poor who had not been led captive to Babylon,

3 they came with their men to Gedaliah in Mizpah: Ishmael, son of Nethaniah; Johanan, son of Kareah; Seraiah, son of Tanhumeth; the sons of Ephai of Netophah; and Jezaniah of Beth-maacah.

Gedaliah, son of Ahikam, son of Shaphan, adjured them and their men not to be afraid to serve the Chaldeans: to stay in the land and submit to the king of Babylon, for their own welfare;

saying that he himself would remain in Mizpah, as their intermediary with the Chaldeans who should come to them. They were to collect the wine, the fruit, and the oil, to store them in jars, and to settle in the cities they occupied.

When the people of Judah in Moab, those among the Ammonites, those in Edom, and those in all other lands heard that the king of Babylon had left a remnant in Judah, and had appointed over them Gedaliah, son of Ahikam, son of Shaphan,

they all returned to the land of Judah from the places to which they had scattered. They went to Gedaliah at Mizpah and had a rich harvest of wine and fruit.

Now Johanan, son of Kareah, and all the leaders of the armies in the field came to Gedaliah in Mizpah

4 and asked him whether he did not know that Baalis, the king of the Ammonites, had sent Ishmael, son of Nethaniah, to assassinate him.

But Gedaliah, son of Ahikam, would not believe them. Then Johanan, son of Kareah, said secretly to Gedaliah in Mizpah: “Let me go and kill Ishmael, son of Nethaniah; no one will know it. Why should he be allowed to kill you? All the Jews who have now rallied to you will be dispersed and the remnant of Judah will perish.”

Nevertheless, Gedaliah, son of Ahikam, answered Johanan, son of Kareah, “You shall do nothing of the kind; you have lied about Ishmael.”

1 [1] This word: actually, no further word of the Lord is recorded until ⇒ 42:7-9. This is a title affixed to the following chapters after they were attached to an earlier form of the book ending with Jer 39.

2 [6] Mizpah: some five miles northwest of Jerusalem, where Israel chose its first king (⇒ 1 Sam 10:17-24). Presumably Jerusalem had been damaged too much by the Chaldean conquest to remain a seat of government.

3 [8] Jezaniah: the seal ring of a high official of this name was discovered in 1932 at the site usually identified with Mizpah, Tell en-Nasbe.

4 [14] The Ammonites: they resented the survival of their ancient enemy, Judah. Ishmael: their willing tool, who doubtless aspired to rule over Judah himself, as he was of the house of David; cf ⇒ Jeremiah 41:1.