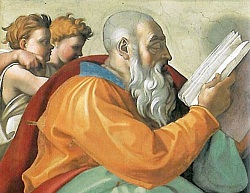 Open your doors, O Lebanon, that the fire may devour your cedars!

Wail, you cypress trees, for the cedars are fallen, the mighty have been despoiled. Wail, you oaks of Bashan, for the impenetrable forest is cut down!

Hark! the wailing of the shepherds, their glory has been ruined. Hark! the roaring of the young lions, the jungle of the Jordan is laid waste.

1 Thus said the LORD, my God: Shepherd the flock to be slaughtered.

For they who buy them slay them with impunity; while those who sell them say, “Blessed be the LORD, I have become rich!” Even their own shepherds do not feel for them.

So I became the shepherd of the flock to be slaughtered for the sheep merchants. I took two staffs, one of which I called “Favor,” and the other, “Bonds,” and I fed the flock.

In a single month I did away with the three shepherds. I wearied of them, and they behaved badly toward me.

“I will not feed you,” I said. “What is to die, let it die; what is to perish, let it perish, and let those that are left devour one another’s flesh.”

Then I took my staff “Favor” and snapped it asunder, breaking off the covenant which I had made with all peoples;

that day it was broken off. The sheep merchants who were watching me understood that this was the word of the LORD.

I said to them, “If it seems good to you, give me my wages; but if not, let it go.” And they counted out my wages, thirty pieces of silver.

But the LORD said to me, “Throw it in the treasury, the handsome price at which they valued me.” So I took the thirty pieces of silver and threw them into the treasury in the house of the LORD.

Then I snapped asunder my other staff, “Bonds,” breaking off the brotherhood between Judah and Israel.

The LORD said to me: This time take the gear of a foolish shepherd.

For I will raise up a shepherd in the land who will take no note of those that perish, nor seek the strays, nor heal the injured, nor feed what survives – he will eat the flesh of the fat ones and tear off their hoofs!

Woe to my foolish shepherd who forsakes the flock! May the sword fall upon his arm and upon his right eye; Let his arm wither away entirely, and his right eye be blind forever!

1 [4-17] In this allegory the prophet becomes the good shepherd of God’s flock, which is being slaughtered; he is the defender of the people exploited by bad rulers. The three shepherds, rulers in general, are to destroy one another in a short time (a single month). The service of the good shepherd is contemptuously valued at thirty pieces of silver, the legal indemnity (⇒ Exodus 21:32) for a gored slave. The prophet is thus a type of Christ, whose mission of salvation to his people was appraised by the Sanhedrists, the false shepherds, at the same base price (⇒ Matthew 26:14-16). In the case of the prophet as well as of Christ (⇒ Matthew 27:5), the money is thrown into the temple treasury, i. e., paid to God, showing thereby how shamefully his divine love and care are requited.