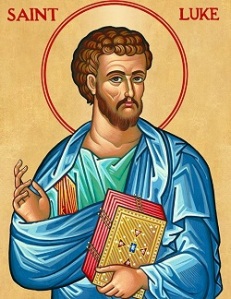 1 While the crowd was pressing in on Jesus and listening to the word of God, he was standing by the Lake of Gennesaret.

He saw two boats there alongside the lake; the fishermen had disembarked and were washing their nets.

Getting into one of the boats, the one belonging to Simon, he asked him to put out a short distance from the shore. Then he sat down and taught the crowds from the boat.

After he had finished speaking, he said to Simon, “Put out into deep water and lower your nets for a catch.”

Simon said in reply, “Master, we have worked hard all night and have caught nothing, but at your command I will lower the nets.”

When they had done this, they caught a great number of fish and their nets were tearing.

They signaled to their partners in the other boat to come to help them. They came and filled both boats so that they were in danger of sinking.

When Simon Peter saw this, he fell at the knees of Jesus and said, “Depart from me, Lord, for I am a sinful man.”

For astonishment at the catch of fish they had made seized him and all those with him,

and likewise James and John, the sons of Zebedee, who were partners of Simon. Jesus said to Simon, “Do not be afraid; from now on you will be catching men.”

When they brought their boats to the shore, they left everything 2 and followed him.

Now there was a man full of leprosy 3 in one of the towns where he was; and when he saw Jesus, he fell prostrate, pleaded with him, and said, “Lord, if you wish, you can make me clean.”

Jesus stretched out his hand, touched him, and said, “I do will it. Be made clean.” And the leprosy left him immediately.

Then he ordered him not to tell anyone, but “Go, show yourself to the priest and offer for your cleansing what Moses prescribed; 4 that will be proof for them.”

The report about him spread all the more, and great crowds assembled to listen to him and to be cured of their ailments,

but he would withdraw to deserted places to pray.

5 6 One day as Jesus was teaching, Pharisees and teachers of the law were sitting there who had come from every village of Galilee and Judea and Jerusalem, and the power of the Lord was with him for healing.

And some men brought on a stretcher a man who was paralyzed; they were trying to bring him in and set (him) in his presence.

But not finding a way to bring him in because of the crowd, they went up on the roof and lowered him on the stretcher through the tiles 7 into the middle in front of Jesus.

When he saw their faith, he said, “As for you, your sins are forgiven.” 8

Then the scribes 9 and Pharisees began to ask themselves, “Who is this who speaks blasphemies? Who but God alone can forgive sins?”

Jesus knew their thoughts and said to them in reply, “What are you thinking in your hearts?

Which is easier, to say, ‘Your sins are forgiven,’ or to say, ‘Rise and walk’?

10 But that you may know that the Son of Man has authority on earth to forgive sins” – he said to the man who was paralyzed, “I say to you, rise, pick up your stretcher, and go home.”

He stood up immediately before them, picked up what he had been lying on, and went home, glorifying God.

Then astonishment seized them all and they glorified God, and, struck with awe, they said, “We have seen incredible things today.”

After this he went out and saw a tax collector named Levi sitting at the customs post. He said to him, “Follow me.”

And leaving everything behind, 11 he got up and followed him.

Then Levi gave a great banquet for him in his house, and a large crowd of tax collectors and others were at table with them.

The Pharisees and their scribes complained to his disciples, saying, “Why do you eat and drink with tax collectors and sinners?”

Jesus said to them in reply, “Those who are healthy do not need a physician, but the sick do.

I have not come to call the righteous to repentance but sinners.”

12 Jesus answered them, “Can you make the wedding guests 13 fast while the bridegroom is with them?

But the days will come, and when the bridegroom is taken away from them, then they will fast in those days.”

14 And he also told them a parable. “No one tears a piece from a new cloak to patch an old one. Otherwise, he will tear the new and the piece from it will not match the old cloak.

Likewise, no one pours new wine into old wineskins. Otherwise, the new wine will burst the skins, and it will be spilled, and the skins will be ruined.

Rather, new wine must be poured into fresh wineskins.

1 [1-11] This incident has been transposed from his source, ⇒ Mark 1:16-20, which places it immediately after Jesus makes his appearance in Galilee. By this transposition Luke uses this example of Simon’s acceptance of Jesus to counter the earlier rejection of him by his hometown people, and since several incidents dealing with Jesus’ power and authority have already been narrated, Luke creates a plausible context for the acceptance of Jesus by Simon and his partners. Many commentators have noted the similarity between the wondrous catch of fish reported here (⇒ Luke 4:4-9) and the post-resurrectional appearance of Jesus in ⇒ John 21:1-11. There are traces in Luke’s story that the post-resurrectional context is the original one: in ⇒ Luke 4:8 Simon addresses Jesus as Lord (a post-resurrectional title for Jesus – see ⇒ Luke 24:34; ⇒ Acts 2:36 – that has been read back into the historical ministry of Jesus) and recognizes himself as a sinner (an appropriate recognition for one who has denied knowing Jesus – ⇒ Luke 22:54-62). As used by Luke, the incident looks forward to Peter’s leadership in Luke – Acts (⇒ Luke 6:14; ⇒ 9:20; ⇒ 22:31-32; ⇒ 24:34; ⇒ Acts 1:15; ⇒ 2:14-40; ⇒ 10:11-18; ⇒ 15:7-12) and symbolizes the future success of Peter as fisherman (⇒ Acts 2:41).

7 [19] Through the tiles: Luke has adapted the story found in Mark to his non-Palestinian audience by changing “opened up the roof” (⇒ Mark 2:4 a reference to Palestinian straw and clay roofs) to through the tiles, a detail that reflects the Hellenistic Greco-Roman house with tiled roof.

8 [20] As for you, your sins are forgiven: literally, “O man, your sins are forgiven you.” The connection between the forgiveness of sins and the cure of the paralytic reflects the belief of first-century Palestine (based on the Old Testament: ⇒ Exodus 20:5; ⇒ Deut 5:9) that sickness and infirmity are the result of sin, one’s own or that of one’s ancestors (see also ⇒ Luke 13:2; ⇒ John 5:14; ⇒ 9:2).

15 [39] The old is good: this saying is meant to be ironic and offers an explanation for the rejection by some of the new wine that Jesus offers: satisfaction with old forms will prevent one from sampling the new.